Copper grows from iron wire like a coral in the sea

Scientific name: Iron is a more active metal than copper, and when it dissolves, it displaces copper from the solution. 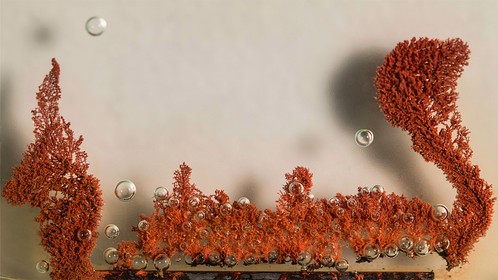 Copper grows from iron wire like a coral in the sea

How to shoot a close up-timelapse video

What causes the Copper Coral to appear?

Iron is a more active metal than copper, and when it dissolves, it displaces copper from the solution. Extruded copper settles in the form of a bizarre crystal. It works like this:

Copper in salt is in the form of an ion (Cu2+) - a copper atom, which has two electrons taken away from it.

Copper gets the missing electrons from iron and settles in the form of a metal.

Electrons can be transmitted not only by direct contact of copper ions with iron, but also through the resulting copper because metallic copper is a conductor.

Copper settles because it is a less active metal than iron.

Why do copper crystals have such a bizarre shape?

For the copper crystal to grow, it is necessary that in the layer of solution next to it has copper ions. With the growth of the copper crystal, these ions precipitate and stick. Soon there will be no copper ions in the boundary layer. New ions appear in result of diffusion, but that is a slow process. The crystal growth is slowed down at this point. But goes on in other places. Therefore, during rapid crystal growth the copper crystal tends to grow into new areas, which are still rich in copper ions. This creates the strange branching form which looks especially beautiful when increased under a macro lens.

Why should we add acid to the solution?

In order for a copper crystal to form on iron, it is necessary that iron ions dissolve in water. In real life, iron may be coated with a layer of iron oxide or grease, which interferes with the contact with water. To activate the surface of iron, we add a little acid solution. And since we are very limited by the European legislation in what we can put in kits, we added the acid salt NaHSO4 solution, which acts as an acid. Basically, if the surface of the clip is well cleaned, the experiment may be performed without adding acid. Try it.

What else, other than iron, may be used in this experiment?

For the growth of copper crystals it is important that the metal used is more active than copper. That means it should be harder to take away an electron from copper than from the metal in use. But if the metal is too active, it will react with water releasing hydrogen. If we look at the series of activity of the main metals, those metals that are left copper, but right of magnesium will suit us: