A copper tree grows inside a layer of salt

Put protective gloves on. Conduct all the experiments on the tray. Keep the growing tree out of reach of children under 12 years old. 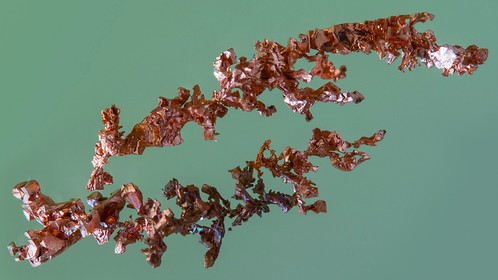 A copper tree grows inside a layer of salt

Why is salt needed?

Salt in the experiment is needed for copper ions and iron to exchange electrons slowly. Since we cannot stop electrons on the fly, we have to affect copper: the speed of copper ion movement in the solution is high, and if the solution is spread over the surface of the salt, the movement speed is reduced. There is also "geological" role of salt. For a “copper nugget” to grow in our experiment, it is necessary that there is space in the “rock”. After filling the jar large crystalline salt leaves spaces. The copper crystal grows along these exact spaces.

Why does the tree grow so long?

In this experiment we intentionally slow the growth rate of the copper crystals. If the crystal growth rate were high, the tree would not be formed; there would be a set of small crystals or a film of copper on the surface of iron. The tree grows a long time because salt holds back copper ions that seek to rise upward toward the iron balls. Copper ions easily pass through a solution, however, since the solution is distributed over solid salt, the ions pass through it is very slow. Why does the copper tree grow upside down?

Let us recall the experiment with the nail. Copper grows on the surface of the nail as a fluffy precipitate. What would happen if in the experiment with the nail the copper solution for some strange reason became uneven in composition? If the top of the solution contained little copper and all the copper was closer to the bottom of the jar? From life experience we think that in this case the lower part of the nail would be covered by a thicker layer of copper. These considerations are confirmed by the laws that describe chemical reactions: the higher the concentration of one of the reagents, the faster the reaction.

Now let's return to the experiment with the copper tree. Here, ferrous sulfate solution is evenly distributed over the entire volume of the jar, and copper is initially in the form of solid salt at the bottom of the jar. Copper dissolves little by little, and thus we create that fantastic situation, which is not possible in real solutions: there is more copper on the bottom of the jar than at the top. Copper ions gradually begin to move upward, a process known as diffusion. Diffusion can occur even against gravity. It turns out that over time, the copper ions are close to the layer of salt, in which the iron balls are. And then the most interesting part happens! Copper ions take electrons from the iron balls and transform into metallic copper. A little copper builds up on the surface of the iron ball. After that we have a system of two metals with an electrical contact between them. In such a system electrons may move through the contact between the metals to the side of the metal with the smaller reduction potential. Additional electrons gather on a small build-up of copper which is in contact with an iron ball. New copper ions move due to diffusion from the bottom of the jar and on the way meet the copper build-up which has an excess of electrons, and now take away electrons from metallic copper, and not iron. Copper ions immediately attach to metallic copper in the form of solid metal. The copper "build-up" picks up the missing electrons from iron. Iron in turn casts iron ions in the area nearby. What we have in result is that copper drives the growth of copper tree from the top down while "sucks out" electrons from the iron ball.

Can I put the jar down? Or it is necessary for it to stand straight?

In our laboratory, we found that the copper tree can grow faster if you put the jar with the growing tree on the side. The copper tree in this case will grow on the surface of the jar and will be very fragile, it will be difficult to remove it. So you can choose for yourself, either to grow a strong tree for a long time, keeping the bottle vertically, or put the jar on its side and to grow the tree faster. In the latter case, do not remove the tree from the jar, and store the tree right in it. Of course, the jar must be kept out of the reach of children. Why does copper from the salt become a metal?

In salts copper is in the form of an ion (Cu2+). Copper gets its missing electrons from iron and settles in the form of a metal. Electrons can be transmitted not only by direct contact of copper ions with iron, but also through the resulting copper because metallic copper is a conductor. So just a small contact of the copper tree with iron is enough for the tree to grow deep into the salt.

How much will the copper tree weigh?

The copper tree cannot grow to be very big. We put 1 gram of CuSO4 * 5H2O into the jar. More than 75% of the mass of the substance is taken by (SO4)2- anion and water H2O. Therefore, even if all the copper from the salt gets into the metal mold, the copper tree will weigh no more than a quarter of a gram. Should I try? Yes, because the tree turns out to be very beautiful!

Can the copper tree grow without salt?

If we fill the jar with just a salt of copper, iron balls and FeSO4 solution, the copper tree will not grow. In this case, a thin layer of copper with cover the iron balls, as in the experiment with the nail.

Why does the copper salt on the bottom of the jar turn green after the experiment?

Transition metals, particularly copper, can form so-called complex compounds with other molecules or ions. Copper may form a complex compound with water, then the copper ion turns blue. If copper reacts with the chlorine ion (Cl-), the formed complex is green. Since you poured sodium chloride (table salt) into a jar with copper sulfate, copper forms a complex with chloride anions. And the color of the salt turns green.