A huge volume of water is converted into powder

Instant snow - You only need to add some water! 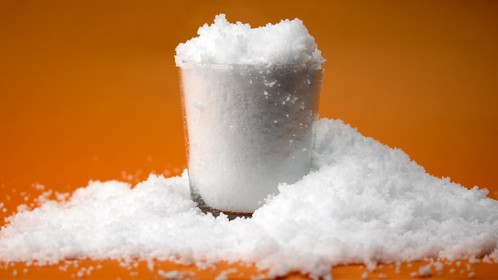 You only need to add some water!

What is sodium polyacrylate?

Sodium polyacrylate is a complex organic molecule composed of many repeated subunits. Each subunit resembles a simple molecule, for example, sodium chloride NaCl.

How does snow form in a plastic cup?

Sodium polyacrylate soaks up water very well. And when we pour water in a cup, sodium polyacrylate granules start to absorb water actively. Like numerous mini-sponges, they swell and increase in size. Thus, the granules cannot fit in the glass anymore and start pouring out.

What would happen if we add less (more) water?

Let's try to figure out what would happen if we add less water (for instance, half of glass instead of full). In such case, sodium polyacrylate granules would expand less, and our experiment results would not be as spectacular.

On the opposite, if we add more water, granules would get sluggish, stick to each other, and turn into a gel—a viscous substance like jelly or aspic meat dish.

For our experiment, we optimized water to sodium polyacrylate ratio, so it swells and expands just enough, while not turning into a jelly.

May I touch this snow?

Yes, for sure! Sodium polyacrylate that absorbed water is soft and pleasant to the touch. You may touch it even without protective gloves, but remember to wash your hands immediately after. Nevertheless, though, do not try to taste that “snow”!