Scientific name: A vial, stained with iodine, remains yellow despite the action of a reducing agent 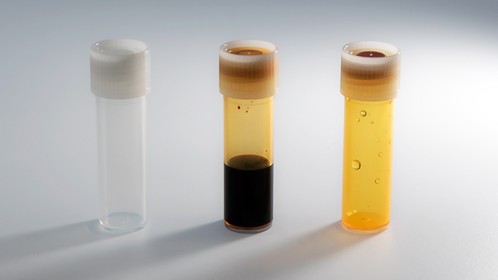 How does iodine get inside the plastic?

From the first glance, the plastic tube does not seem to have any crevices or cracks in its walls. They look and feel solid! Is not it strange for a substance to penetrate from outside into these plastic walls? Sounds like some kind of magic, but it is all about science!

Let us imagine we have a very powerful microscope (from the Greek mikrós, meaning “small”) to see the microcosm of common things. Micro world differs significantly from what we can usually observe.

As a matter of fact, there are many micropores in plastic walls of the tube. Small molecules such as iodine I2 can infiltrate through these tiny pores inside plastic. There is plenty of free space inside the material, where iodine molecules can stay for a long time. Processes like infiltration of iodine molecules into plastic are called diffusion.

Let us dig into details. What does plastic consist of? It is a polymeric material: for instance, polyethylene or polypropylene. Polymers have complex three-dimensional (3D) structure. They are built of a huge number (up to several millions!) of so-called monomers. The latter are small and usually identical molecules connected to each other. Polymers are also called macromolecules (from the Greek makrós, meaning “long” or “big”). There is always some free space or hollows inside 3D structure of such molecules. Iodine molecules may occupy these hollows.

On the contrary, polar molecules have atoms with great difference in redox potentials, such as H and O in water H2O. It means that electrons are distributed unequally in such molecules. Consequently, polar molecules carry positive charge at one end and negative charge at the other. Naturally, interactions between molecules in polar substances distinct from those in nonpolar. Polar substances do not “like” nonpolar (and vice versa), so they do not dissolve in each other. For example, nonpolar liquid such as oil cannot be dissolved in polar water.

One essential rule of chemistry states that substances of similar nature (polarity, for instance) "feel" comfortable with mixing or dissolving in each other. Thus, nonpolar iodine molecules readily move into plastic through its micropores. However, iodine does not "feel" quite comfortable in polar water. What is diffusion?

Diffusion is a process of spreading the molecules of one substance among the molecules of another substance. In other words, molecules of two substances mix together. Usually, this process is mutual. Through diffusion, molecules occupy all the available space around. Ultimately, the concentration of particles (number of molecules per volume unit) becomes even in every part of the system. Here is an illustrative example from real life. Imagine peeling a fresh and juicy clementine somewhere indoors (in a classroom, for instance). Its smell spreads fast across the room and next thing you know, someone asks you to share your clementine. Guess who is responsible for this unexpected turn of events? Diffusion! Volatile substances responsible for clementine smell were released into the air. Initially, these molecules were all around you providing the strong smell, but then they spread throughout the room. On the one hand, the smell became weaker since the concentration of molecules around you lowered. On the other hand, now everyone in the classroom can feel the smell.

How diffusion worked in our experiment? Here, diffusion proceeded in a bit more complex way. Iodine molecules from aqueous solution moved into the solid polymer. Polymer molecules stayed in place. Thus, it was a one-way process: iodine was the only component that acted. At the same time, polymer structure is too rigid for iodine to spread all over the plastic. It would have taken a long time for iodine molecules to reach the voids deep inside the plastic. Furthermore, some of them cannot be reached at all. Why should we wait for an entire day?

Diffusion of iodine inside plastic proceeds rather slowly. It takes a while for iodine to fill in molecular voids in plastic. If you do not wait long enough, the tube would be just slightly colored (pale). Still, colorful and bright experiments are so much cooler!

Why does not disodium disulfite Na2S2O5 bleach iodine inside the plastic?

Disulfite is simply unable to reach the iodine "concealed" inside the plastic. As a result, the reduction of iodine molecule I2 to iodine ions I–, which takes place in an aqueous solution, does not happen inside the plastic:

Why cannot disulfite molecules penetrate inside the plastic? Are these molecules too large? No, their size is actually comparable to iodine molecules.

We hope you still remember that similar substances "like" each other. Since S2O5- ion is charged, it is highly polar. Water molecules are also polar, while plastic consists of almost nonpolar molecules. Therefore, both polar disulfite ions and water molecules would "feel" very uncomfortable in plastic. Naturally, neither water nor disulfite can penetrate inside the walls of the plastic tube. Otherwise, they would have had to spend energy to overcome repulsion force. Such process would be energetically unfavorable!