Iron nail turns red in a solution of copper salt

Scientific name: The nail becomes red because it is covered with a thin layer of copper. Copper settles on the surface of the nail because it is a less active metal than iron. 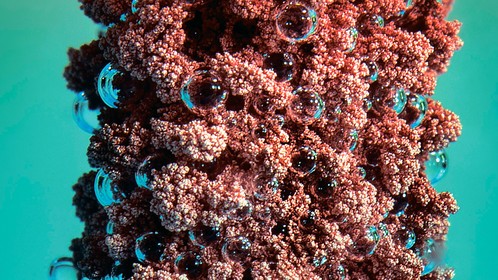 Iron nail turns red in a solution of copper salt

Why does the nail become red?

The nail becomes red because it is covered with a thin layer of copper. Iron from the surface of the nail goes into solution and the copper from the solution forms a thin layer on the nail surface. The copper in the solution is in the form of a positively charged ion Cu2+. This means that the copper is missing two electrons. Each electron carries a negative charge. To turn into a metal (uncharged) form Cu0, copper takes the missing electrons from iron and turns into metal.

Why does copper settle on the surface of the nail?

Copper settles on the surface of the nail because it is a less active metal than iron. The activity of a metal is its ability to donate electrons, becoming a positively charged ion. The more active the metal is, the more it tends to become an ion. In this case, the iron in the nail tends to become an ion and gives up its electrons to copper in the solution. Copper accepts electrons from the solution and turns into metal form.

Why is iron more active than copper?

In order to introduce a measure of metal activity, chemists came up with a special term called reduction potential. Without going into the details of the calculation and measurement of reduction potential, you can simply put metals in a series in order of decrease in its value. Metals with the highest redox potential more easily act as reducing agents and readily donate electrons. These metals are located at the top:

They have just one or two electron and it is easy to part with them.

The greediest are precious metals. If we use an analogy from the real world, we can say that poor people spend money more easily, and the rich are often very thrifty to trivial matters. So it is possible to remember that noble metals are not inclined to give up their "treasure" - electrons. Therefore, at the end of the activity series there will be the following metals:

Iron on the other hand occupies an intermediate position between the highly active metals and precious metals. Therefore, if copper and iron were to "fight" for an electron, iron, having greater activity, gives the electron to copper. The main reason for this is the larger reduction potential of iron. Reduction potential is an experimentally measured value, and this value is more for iron than for precious metals. But you can remember the three main groups of metal activity: the elements of the first and second groups (columns of the periodic table) are the most active. Precious metals are least active. Other metals occupy an intermediate position.