Make your own battery!

Scientific name: Electric current is generated as a result of a chemical reaction in zinc-manganese battery

Zinc–carbon battery - Make your own battery! 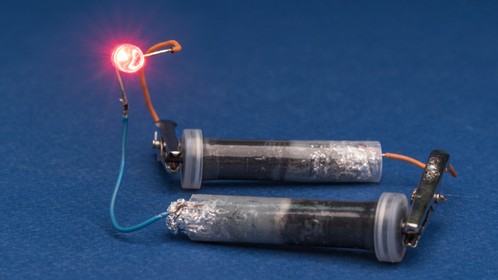 Make your own battery!

What is the principle of operation of a zinc–manganese battery?

The manganese battery (zinc-manganese battery, zinc-carbon battery) – is a type of chemical electric current source. Electric current is generated as a result of a chemical reaction. In our case it is the reaction between manganese oxide (MnO2) and zinc powder (Zn). There are two sections in the battery; the oxidant MnO2 is contained in one of them and Zn, the reducing agent, is contained in the other. When the battery is completely assembled, and the circuit closed (by connecting the two terminals to a LED – Light Emitting Diode), two reactions begin: oxidation of the zinc and reduction of the manganese. This leads to generation of electric current and the LED begins to glow.

Now let us look in detail at what is happening in the battery. Firstly, what is electric current actually? It is laminar motion of charged particles in a certain direction. Such charged particles can be electrons (“electron current”) or ions (“ion current”). In a system in which electric current is generated by a chemical reaction there are ion and electron currents simultaneously.

Let us talk about the electron current. Do you remember that reduction-oxidation reaction can be split into two independent processes; the oxidation of one agent and the reduction of another one? In a battery, these two processes run in two separate sections, isolated by wadding:

In reduction-oxidation (or redox) reactions, electrons are carried from one element (reductant) to another (oxidant). In a battery, electrons move in a certain direction, forming the electric current. As long as nothing is connected to the battery, terminals and the elements are isolated by wadding, the reaction does not take place.

When we close the circuit by connecting the terminals to a diode, the two reactions are activated and electrons start moving from the zinc section to the manganese section. Electrons cannot penetrate the wadding, hence they move through the foil, then through one terminal and wires to the diode (and here it glows!); continues through the other wire and finally through a graphite rod to the manganese oxide (MnOsub>2) section.

Why do we need graphite powder?

The battery will work only if the electric current can move (flow) “unobstructed”. That means the agents inside the battery must be able to conduct electricity very well.

Manganese dioxide MnO2 itself has very minor ability to conduct electricity, unlike graphite powder, which is a very fine conductor. That is why we mix MnO2 with graphite powder. The resultant mixture has conduction abilities good enough to use in a manganese battery.

As a matter of fact, things are even more complicated than they appear. Without graphite powder, the battery would work for a while as well, but only a little while. Manganese dioxide located closer to the graphite rod would get involved in the reduction reaction first. This would happen because the rod is the source of the electrons that start the reaction. Within a short time the reaction would isolate the rest of the dioxide from the rod and the battery will run out. This is easily prevented by graphite powder which ensures the electrons are uniformly conducted throughout the volume of the section, causing all the manganese dioxide to react.

Why do we need NH4Cl solution?

yields Zn2+ that easily turns to hydroxide Zn(OH)2 or to zinc oxide ZnO under our conditions. These two compounds are almost insoluble in water. They form on the surface of zinc powder, obstructing further reaction. After storage of a certain amount of these compounds, the current will just stop. Ammonium chloride helps once again here. Ammonia NH3 obtained during the reaction forms a compound with Zn2+ which is easily soluble in water:

Agents like ammonium chloride NH4Cl are known as electrolytes. An electrolyte is a compound that has the ability to conduct electric current in a solute (or a melt) thankfully to ion dissociation (process when a compound divides into ions in a solution or in a melt). It is important to realize that this is an ion type of current. That means, it is formed by laminar movement of ions in the system (not electrons!).

In water, ammonium chloride dissociates to cations of ammonium and anions of chlorine:

What should be the requirements of salt, if we want to use it in a battery?

Firstly, it must be easily soluble in water, completely dissociating down to ions (such electrolytes are called “strong electrolytes”).

Secondly, as we have already found, it has to react with Zn2+, forming water soluble compounds therein.

Other than that, the salt must not react with the initial reagents – metallic zinc and manganese dioxide.

Finally, all battery components have to be inexpensive, in order to make the use of the battery reasonable and its production profitable.

As a result, ammonium chloride is a perfect match for creation of manganese batteries.

How can we replace Zn and MnO2?

In order to ensure perfect battery operation, we should choose a suitable pair “oxidant-reductant” (say, MnO2 – Zn). Neither agent must react with the environment (air, water), but at the same time they have to be good electrical conductors. The compounds formed as the result of the reaction are important too and should not be gaseous, not precipitate etc. Also, both oxidant and reductant have to be light enough (who needs heavy batteries!?), cheap and accessible.

As a reductant (instead of Zn) iron Fe and cadmium Cd are sometimes used. These batteries are known as nickel-iron and nickel-cadmium respectively. The oxidant in such batteries is nickel oxide hydroxide (NiOOH).

Batteries in which lithium Li is used in the role of reductant are also very common. It is paired by MnO2 that is already familiar to us and copper oxide (I) (CuO) or iron disulfide (FeS2).

Also, even more “exotic” lithium batteries exist, in which the oxidant is liquid sulfur dioxide (IV) (SO2) or even iodine (I2). It is worth noting that the latter (Li/ I2) is not completely a “salt” battery, as the reaction flows without any electrolyte and by direct interaction between lithium and iodine:

In full, this reaction looks as follows:

Why do we need wadding?

Wadding is needed to prevent the blending of manganese dioxide MnO2 and zinc Zn. If no wadding was placed between the two sections, the reaction between reductant (Zn) and the oxidant (MnO2) would be uncontrolled so the electron exchange between them would take place inside the battery. Thus, the electron flow would not move through the wires and the diode would not glow. Clearly, such a battery would be completely useless so this is where a common piece of wadding plays a very important role!

Why do we use a graphite rod instead of a metal one?

The main advantage of graphite is its inexpensiveness and chemical passivity. It does not react under regular conditions with air, water and reagents that are used in a battery. Graphite is not only an accessible and light material; it’s also a good electrical conductor. It’s utterly important to make the battery work effectively.